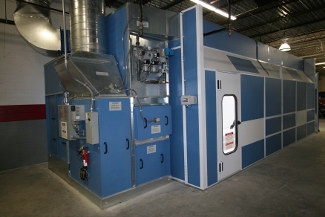 *These are nominal dimensions and should not be used for planning purposes. Please contact Nova Verta for detailed drawings and specifications tailored to your installation.

Step inside a Raptor Direct-Fired Series paint booth from Nova Verta and see how it outshines competitive systems. It’s more than the strategically placed lighting that provides uncompromising illumination. Our superior airflow and quality design are second to none and make it the most cost effective paint booth system in its class.

The Raptor Direct-Fired Series, like others in its class, utilizes a 1.1 million BTU burner with 100º F temperature rise and 100% efficiency, and incorporates a 90% recirculation cycle in bake mode.

Spray Cycle
At a single press of the touchpad controller, the Nova Verta booth is in the Spray Cycle and ready for paint application in a matter of minutes. At this stage, a steady stream of freshly heated air is passed across the direct-fired burner. The Raptor Direct-Fired Series provides conditioned air into the booth and automatically maintains a constant, ideal minimum booth pressure, without the use of a damper or operator intervention (automated pressure control is optional).

Bake Cycle
After the painting process is complete, another press of the touchpad controller puts the booth in the Bake Cycle. The Bake Cycle effectively re-circulates air, minimizing electricity usage and fuel consumption. Compared to other systems in its class, the Raptor Direct-Fired Series provides higher-velocity airflow, shortening cure times on conventional and waterborne paints.

Lighting
With a minimum of 10 Class I, Division II light fixtures and four color corrective tubes in each fixture there’s a visible difference in a Raptor Direct-Fired Series booth. Strategically placed throughout the interior of the booth, Raptor 27’ Series features eight horizontally positioned fixtures at the hip and four horizontally mounted on the side walls. Large booths offer even more light fixtures and optional fixtures are also available. Whatever the booth size, all fixtures use a uniquely-designed ballast to eliminate shadowing and the interference of light output and are multi voltage capable.

Controller
The Siemens TD 200 touchpad with a three-inch, two-line display makes the Raptor Direct-Fired Series incredibly easy to use. Simply scroll to change parameters like temperature values and cure times. Self-diagnostics indicate the location of problem area(s) on the touchpad display to keep the booth operating at peak production. Controller screens also display booth hours, booth pressure, and temperatures. With the touchpad, the Raptor Direct-Fired Series puts total control at your fingertips.